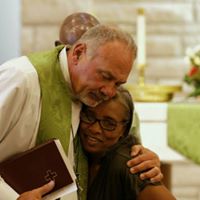 The Rev. Clint K. Poppe, son of the late Henry C. and Adeline J. (nee Kucera) was born on August 7, 1958, in West Point, Nebraska. He attended St. Paul Lutheran grade school and graduated with honors from West Point Junior-Senior High School in 1976. He attended The University of South Dakota, Dana College, Northeast Community College, Concordia College, Seward, Midland Lutheran College; and Concordia University, Mequon, Wisconsin, where he received his Lay Ministry Certification in 1988. In 1994 he entered Concordia Seminary, St. Louis, Missouri, where he received his Master of Divinity degree in February of 1998.

He has been active in many local and civic organizations over the years including the West Point Volunteer Fire Department, West Point Police Reserve, Ducks Unlimited, West Point Baseball Association as well as serving 4 year terms on the West Point City Council and the Educational Service Unit #2 in Fremont. Nebraska.

He began serving a delayed vicarage at Good Shepherd Lutheran Church in Lincoln, Nebraska in April of 1997, was ordained into the pastoral office on April 26, 1998 at St. Paul Lutheran Church in West Point and was installed as pastor of Good Shepherd on May 3, 1998. He has served two three-year terms as First Vice President of the Nebraska District and member the Nebraska District Board of Directors (2003-2009). He has also served as vice-chairman and chairman of the Outreach and New Mission Commission of the Nebraska District, chairman of the District Nominations Committee, voting delegate to the 2001 Synodical Convention, and is the past Nebraska District Coordinator for the “Tell The Good News About Jesus,” synod-wide personal evangelism emphasis. He also serves as an advisory member to the Board of Directors for the Haiti Lutheran Mission Society, USA which is very active with mission work outside the United States, and has taught as a guest instructor in Haiti and at Concordia University in Seward. He is currently supervising his thirteenth Vicar and has led the congregation to start a preaching station in nearby Hickman. Good Shepherd is located at 3825 Wildbriar Lane, just north of 40th Street and Old Cheney. 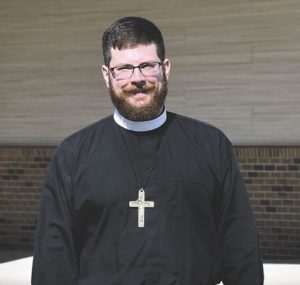 Pastor Adam Moline was born in Lincoln Nebraska.  He attended school in the Lincoln area, graduating from Lincoln Lutheran High School in 2002.  He attended Concordia University Seward, Nebraska, graduating with a history degree in 2006.  After CUNE, Moline furthered his education at Concordia Theological Seminary in Fort Wayne, IN, graduating in 2010.  He was ordained in that year, and began to serve a dual parish in Hankinson North Dakota, until accepting the call to return to Lincoln and serve at Good Shepherd in 2018.

Moline has a lovely wife and 4 great children.  He likes to hunt and fish.  While in North Dakota he became a Sioux Hockey fan, and also enjoys the Nebraska Cornhuskers.  He likes to travel and has been to Kenya, Germany, and Israel.  He has served in a variety of capacities through his ministry:  LWML District Counselor, ND Board of Directors Member, Circuit Visitor, ND Board of Evangelism and more.  His favorite service of the church year is the Easter Vigil due to its beautiful message and liturgy.  He is excited to be serving the saints of Good Shepherd Lincoln.

He grew up as a pastor’s kid in Pryor, Oklahoma; Ravenna, Nebraska; Kirkland, Washington; and Sidney, Montana.

Pastor Russert has two children, Anna and Christian; and a dog Skye. 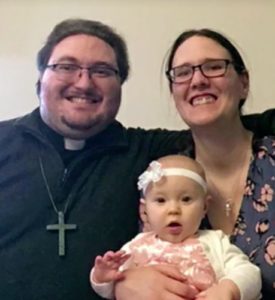 Vicar Timothy Steele II, CTSFW Class of 2022, Serving Good Shepherd August 2020 – July 2021. Born in San Diego, California, Vicar was raised primarily in Omaha. A life-long Lutheran, he was confirmed at St. Mark Lutheran, Omaha NE, and attended the Concordia Lutheran Schools of Omaha, graduating from Concordia Jr./Sr. High School in 2009. He graduated from Wayne State College in Wayne, NE, with a double major in Psychology and Sociology. While attending Wayne, he met his wife Amy, who is a native of Lincoln. Before attending Seminary, he worked variously in social services, specialized childcare for children with behavioral problems, and retail management. Their first child, Winry Elizabeth, was born in 2019, while at Seminary.

Worship Services in the Word of God